Recognizing the Work of the First First-Responders

Ambulance Communications Officers in our region receive more than 36,000 medical and fire calls a year for assistance. On-duty 24/7, 365 days a year, this work is critical to the chain of survival—but the staff performing this vital function are rarely visible.

Ambulance Communications Officer James Sutherland, earned his first pink Stork Pin on Friday morning, March 5, 2021.  At about 9:45 am, James, in his third year as an ACO at North Bay CACC, received a 911 call for a young lady who was in labour and assisted in the delivery of a baby girl in Cobalt, Ontario.  He remained calm and cool while he coached the expectant parents through the birth of their healthy baby girl, who arrived minutes later, as they waited for an ambulance to arrive.  Temiskaming EMS Paramedics arrived a few minutes later to take over care of mom and baby who were transported to Timiskaming Hospital and are both doing well.

The metal stork lapel pins are presented to CACC staff who are involved in a baby’s delivery — a joyous part of a job that is often filled with tragedy.

Often referred to as the first, first responders, communicators have a challenging task. It is imperative that the call taker determine what happened and how to help before responders arrive.

At approximately 1:20 hrs, February 3, 2021, the North Bay CACC received multiple 911 calls regarding a vehicle fire in Kirkland Lake, Ontario that was rapidly spreading to the adjacent house.  ACO Shannon Penasse answered the first 911 call from the neighbour across the street.  She quickly and calmly took control of the situation, determined the exact address of the fire and extracted pertinent information from the caller.  Meanwhile, the fire department had been paged by her co-workers and were responding.  Shannon then had the forethought to elicit the phone number for the house on fire, call the residence and instruct the occupant to leave immediately.  CACC staff, including Team Leader Sylvette Brousseau and ACO Rachel Sheppard received and managed over fourteen 911 calls for this fire in a very short amount of time.

As a result of Shannon’s call to the residence, the occupant, who was hard of hearing and unaware of the fire, grabbed her house coat, her cat and her purse, managing to escape out the backdoor of the house as the windows in her bedroom were breaking due to the intensity of the fire.  Assisted by her neighbour, she walked barefoot through the snow, over a fence, and to her daughter’s residence 5 houses away. In the thank you card she sent Shannon, the fire victim states, “because of your call, I was safe at my daughter’s house before the fire trucks arrived.”  The victim of the fire had spoken to various neighbours in an effort to identify the caller to her residence that morning as she believes that this individual saved her life.

Marc Picard, Manager, CACC says while an emergency call takes only a few minutes, in a crisis it can feel much longer and the call taker must remain calm when most callers are anxious, distraught or confused.

“Call takers are specially trained to gather the critical information needed to prioritize and dispatch calls,” Picard explains. “Not all calls come in from a residential or business address—people need assistance at their cottages, on a snowmobile trail or somewhere on the highway. Dispatchers have to be able to identify a variety of locations on a digital mapping system to be able to send assistance wherever they are.”

Also during this time the call taker has to get specific medical information to both provide pre-arrival instructions to the caller and if a Primary or Advanced Care Paramedic is needed to respond. “They also determine whether assistance is required from Ornge Air Ambulance, Medical First Response Teams, Fire Department or Police,” Picard says.  “Moments later, the next 911 line rings and the process is repeated.”

North Bay CACC staff are fortunate to have an outstanding working relationship with the Ontario Provincial Police Provincial Communications Centre in North Bay as well as the North Bay Police 911 Communication Center, whom they collaborate with daily. 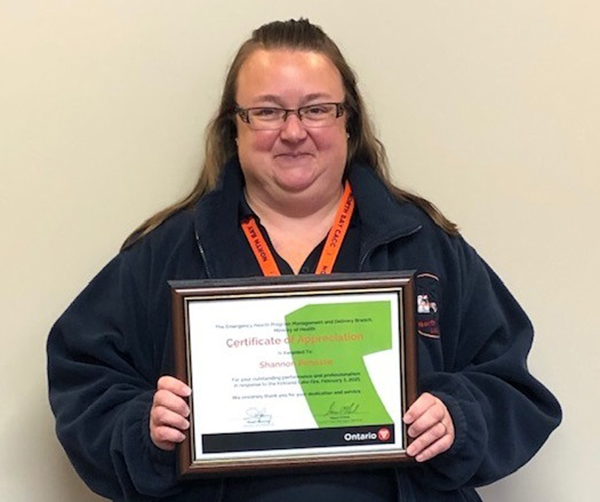 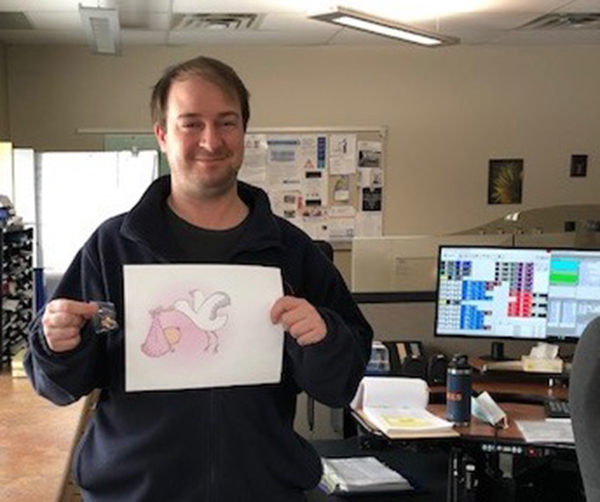 About the North Bay CACC

The North Bay CACC is a department of the North Bay Regional Health Centre located off-site.  Under the direction of the CACC Manager, the North Bay CACC is staffed daily by Team Leaders, full time and part time Ambulance Communications Officers and support staff, including an Operations Supervisor, Information Support Officer, Liaison & Policy Officer, Program Assistant, as well as an administration clerk.

On duty CACC staff manage 23 EMS Resources at 10 EMS stations, 9 First Response Teams and 22 Volunteer Fire Departments.  This includes Primary Care and Advanced Care Paramedics, Supervisor units and any air ambulances resources that are in the area.  The CACC also coordinates the use of the NBRHC Community Transfer Vehicle. Behind the dispatchers are an administrative staff that support and assist their work, from payroll, to policy writing, to computer maintenance and upgrades.

There are 58 Fire Departments in the geographical area covered by the North Bay CACC.  Most Fire Departments maintain a tiered response agreement with EMS, which dictates when the CACC should notify them to respond to assist with medical calls, off road rescues or motor vehicle collisions.

With the assistance of the Ornge Communications Centre, emergency calls and non-emergency long distance patient transfers are coordinated with both helicopter and fixed wing air ambulance resources.  There are five hospital helipads, 14 community helipads and three airports within our catchment area.  During daylight hours, an air ambulance helicopter can choose to land directly at the scene of a serious incident if there is a sufficient clearing.

The CACC has a Quality Assurance program which ensures that calls are constantly reviewed to maintain a high quality of service mandated by the Ministry of Health and Long Term Care.

The North Bay Central Ambulance Communications Centre is committed to ensuring a high level of communications services are provided to both the citizens of Ontario, the ambulance services, fire department and police services at all times.