North Bay Regional Health Centre’s Patient and Family Partnered Care Coordinator, Tamara Dube-Clarke and the Chirgwin Family of North Bay have been presented with a provincial 20 Faces of Change Award.  It’s an award created to honour those who have inspired positive changes in Ontario’s health care system.  They were specifically recognized for making the health care system more patient-focused. Kathy Chirgwin was the wife of Andy, who had Alzheimer’s disease and had been a patient at NBRHC for more than four years. Sadly, Andy passed away in January of 2015. 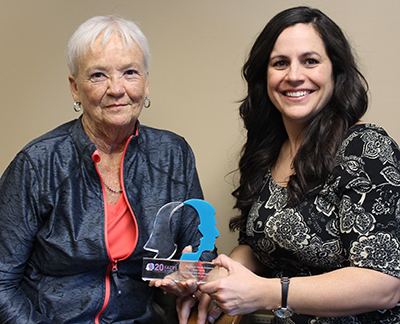 “Kathy wanted to somehow show the caregivers the person her husband used to be, someone who loved his family very much, so that they would better understand him,” said Dube-Clarke. “So we decided to work together to create a video of Andy’s life story to introduce him to his caregivers as a former policeman, a husband, father and grandfather.” The video helped hospital staff have empathy for Andy as a patient and as a person, and has been used by NBRHC as a training tool.

Dube Clarke and Kathy Chirgwin were among the recipients recognized at The Change Foundation’s Capstone Summit and 20th Anniversary Celebration at the Marriott Downtown Eaton Centre Hotel in Toronto, March 9, 2015.

“We are extremely excited to shine a light on your achievements as a leader in patient engagement and family-focused change in the province’s health care system. It is our honour to celebrate your demonstrated commitment to improving the system for patients and families with this award,” stated the Change Foundation in a letter confirming the award to Dube-Clarke.

Launched last November, the 20 Faces of Change Awards campaign sought nominations of patients, caregivers, health care leaders and practitioners, family members, community members, volunteers, and staff that have contributed to improvements in patient- and family-focused care. The 20 recipients were chosen by a specially appointed Selection Committee of third-party health care leaders who sorted through over 80 nominations from a diverse range of teams, individuals and organizations, submitted from all across Ontario.